The National Gallery in London was on my list of places to visit for The Synthetic Image research project because I wanted to see Carlo Crivelli’s picture of Saint Michael, of which I have studied a reproduction in detail. As always, of course, there were many other works to enjoy as well. But also one disconcerting experience. 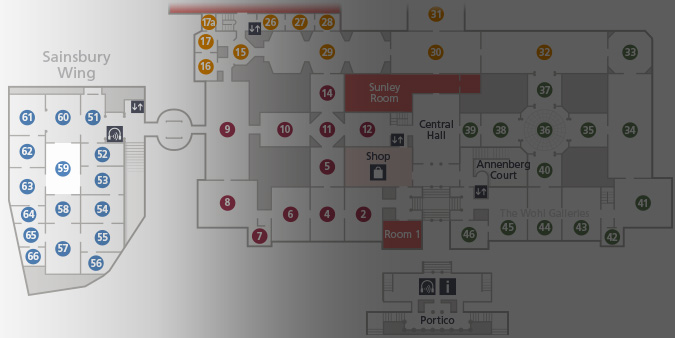 An entire wing of the museum is filled with paintings from the era that I’m most interested in. The Sainsbury Wing to the side of the main building on Trafalgar Square is dedicated to paintings from 1200 to 1500. Room 59 is almost exclusively devoted to the work of Carlo Crivelli. Crivelli is a bit of an exception in the reference collection for The Synthetic Image project, and indeed Cathedral-in-the-Clouds as a whole. Most of the project is inspired by the work of Flemish Primitives but Crivelli is Italian. Yet it’s difficult to imagine he wouldn’t have been familiar with the work of Van Eck and Van der Weyden. There are very strong correlations in terms of subject matter, aesthetic style and expression. But Crivelli adds a nice dose of Italy in the mix. So much so that when I entered the gray room in the museum I couldn’t help but feel that the golden masterpieces really belong in a sunnier climate.

Many of Crivelli’s works are altarpieces. The National Gallery displays the gilded woodwork that frames one of them. It made me wonder about the craftspeople responsible for this marvelous aspect of the work. Especially the many three-dimensional elements in Crivelli’s paintings create a strong connection with the frames. 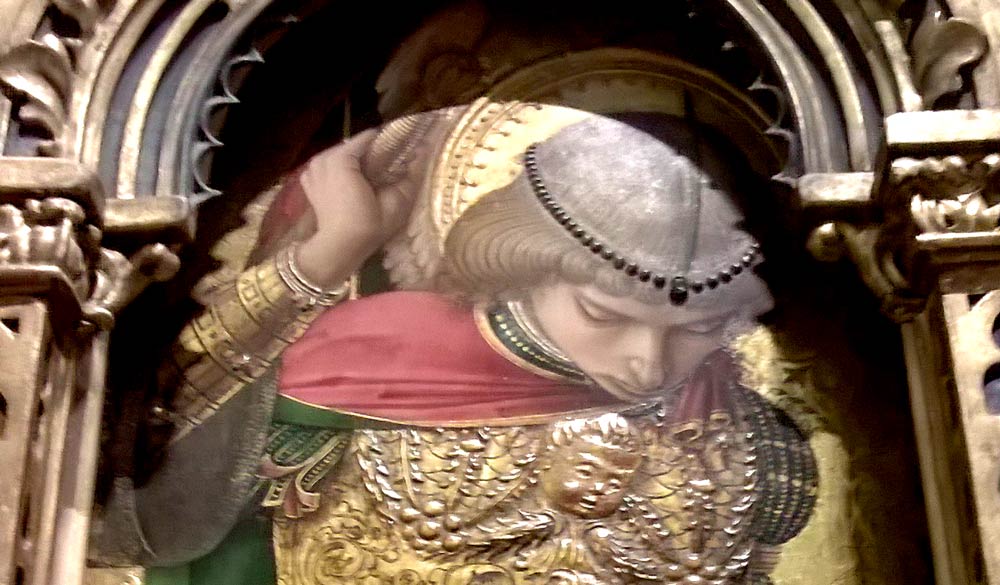 Saint Michael is displayed within its frame as well. But sadly not in the complete altarpiece it once belonged to, even though three other parts of this altarpiece are on display in the same room. Being in its physical presence allowed me to answer some questions I had when perusing the photographic reproduction. The headband of the angel is indeed three-dimensional, for instance, with what looks like a real gem on his forehead. But I also experienced something a lot less enjoyable.

Nothing. I felt nothing when I saw Crivelli’s Saint Michael in the flesh. I had made myself so thoroughly familiar with a reproduction of the piece that the real thing felt closed to me. I guess I usually “open up” artworks by exploring them. Looking at different elements and interpreting them functions as the opening of windows and doors, or as removing layers of clothing. Bit by bit the artwork allows me to enter, and I am transported. But with Saint Michael I had already done a lot of this work at home, albeit not with the same aesthetic effect. So I guess my mind was like “Been there done that”. I have similar feelings for the Mona Lisa or the Nike of Samothrace. I don’t seem to be able to see those very famous works of art. I look at them and nothing happens, no matter how hard I try.

This reminded me of an essay that I read a long time ago, when postmodern thinking had made it pertinent again in the 1980s. In The Work of Art in the Age of Mechanical Reproduction (published in 1935), Walter Benjamin talks about an aura that surrounds physical objects and that seems to be affected by photographing them. The more photographs are taken of something, the less impressive it becomes. Or that’s at least what my young mind got out of the essay. I’ll reread it one of these days.

Ironically the reason why we were able to go to London this time was to speak at a symposium about the preservation of digital art organized by Rhizome and Google Arts & Culture. The latter, of course, is deeply involved in meticulously photographing and distributing mechanical reproductions of art and museums. As an art fan, I applaud this to some extent, but my experience with Saint Michael and Walter Benjamin’s observation do make me wonder if they are not basically destroying all art.

Luckily there were many other Crivelli’s in the room. And even in their dry London presentation (compared to the drama of the Crivelli room in the Pinacoteca di Brera), being able to explore these works in person is always a feast. Strangely I had discovered Crivelli’s work only a few years ago. Somehow he doesn’t belong to the cannon that is taught in art school. And his work does indeed not fit very easily in the nicely linear story that art history often tries to be. It’s very clear to see why, though. Art history has a tendency to elevate masters from the past whose work displays some relationship with modern art. The golden, mystical atmosphere of Crivelli with his grumpy saints and refined lines and postures isn’t exactly the kind of stuff that would have inspired Cézanne or Manet. Although surely the surrealists must have adored the strange gherkins and apples that randomly populate almost all of Crivelli’s pieces. 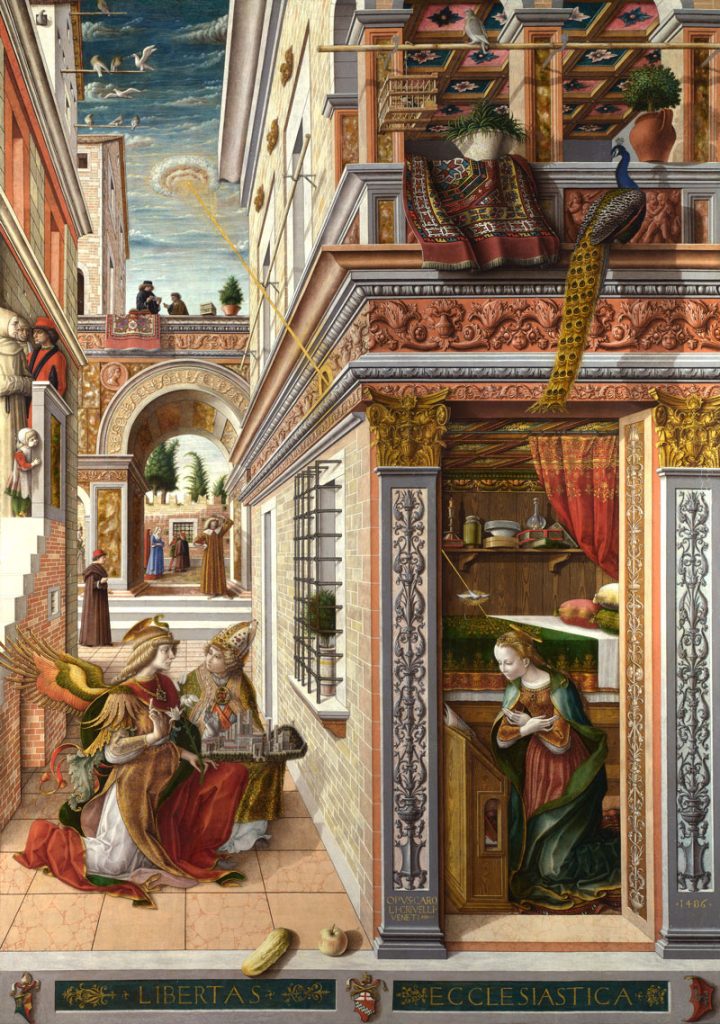 Next to the typical depictions of saints and virgins for polyptychs, the National Gallery also shows his striking Annunciation with Saint Emidius. I was surprised by the size of this work. It’s two meters tall! In reproduction it somehow feels like a miniature. What a glorious picture! It’s a very odd annunciation scene that shows part of a city street that anyone who has visited Italy will find familiar. Virgin Mary is just one of the people who live in this town and God sends his spirit to her through a conveniently located little window which turns parts of the wall around it gold. It’s a strange and puzzling piece that has your eyes continuously bouncing from one element to the next. Especially the symbolism of birds and cages is particularly amusing in the context of the immaculate conception.

All the Crivelli’s in this room are beautiful! I was very moved by The Dead Christ supported by Two Angels, especially because baby looks so sad! 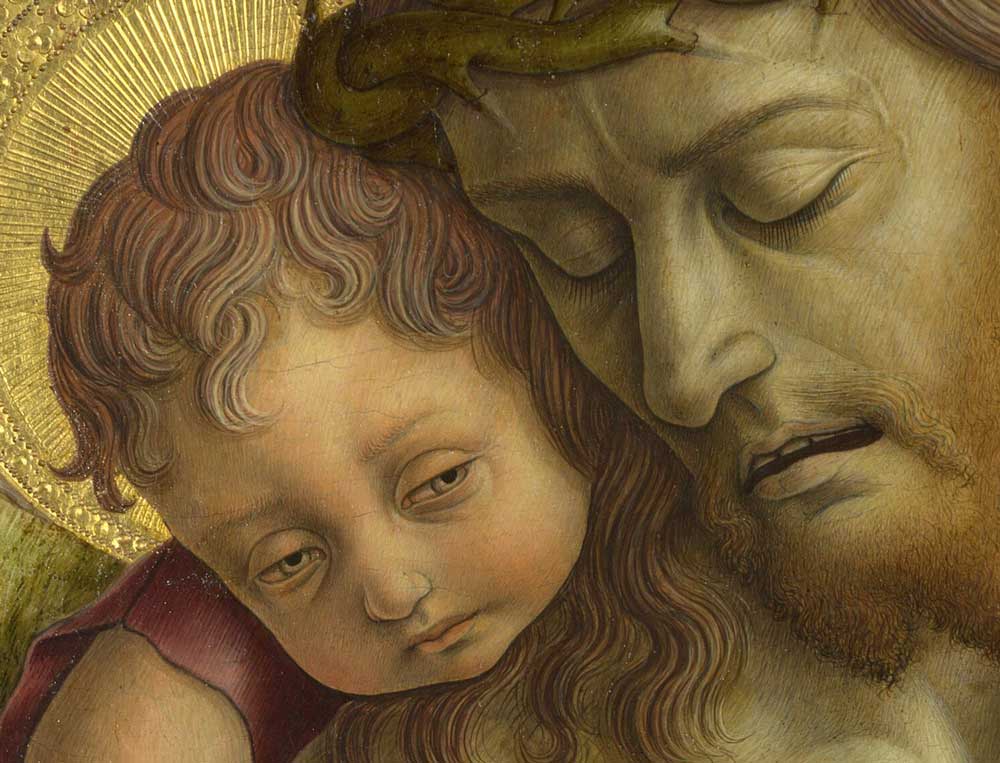 It’s wonderful to see how well Crivelli’s work has been preserved. Most of his pictures appear bright and sharp to us, with very few cracks. Maybe this is because they hung in cool dark churches most of the time. Or perhaps he painted on top of a layer of gold leaf. Paintings on metal tend to preserve much better than on canvas. I understand that the mobility of canvas offers great advantages but the wood that the Primitive Masters painted on is just a superior surface. Not only because it tends to preserve better, but also because it’s even, so we just see the picture not some woven texture. I guess this is another thing that relates the old paintings to work in the digital medium: a clean flat surface.

Many of Crivelli’s figures look down. Saint Michael has a reason for that as he’s keeping his eyes on Lucifer beneath his feet. But the others just seem immersed in thought. They make no eye contact with the spectator but invite them to join in their meditation. And although it is especially striking in Crivelli’s depictions, this is not unique. It is in fact rather common for “primitive” painters to depict characters with half open eye lids. This adds a lot to the feeling of intimacy of such works and encourages us to imagine a sensual connection with the scene rather than only a visual one. It draws us into the work. 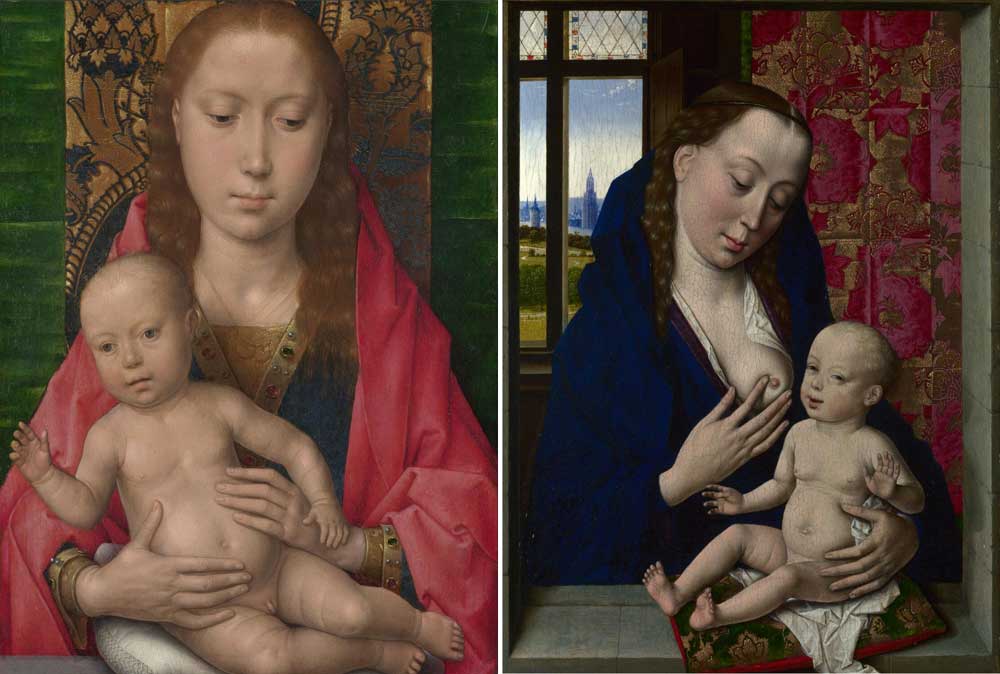 I feel like some kind of patriot. In every museum I visit, I look for the Flemish masters. I love looking through the windows in such paintings in a foreign land and seeing views of what could be my home town of Ghent. In fact, our apartment is just around that corner! The National Gallery houses two beautiful Virgin and Child pictures, one by Memling and another by Bouts. I was moved by the contrast between the silent posture of the virgin and the brilliant golden rays behind her head in Memling’s picture. And Bouts reminded me that we can have fun with such elevated themes. A tender loving sort of fun. Not mockery or irony. Gentle, sympathetic. Baby Jesus seems to be laughing as Mary offers her nipple.

As always I found several other depictions of Saint Michael in the museum, or of his counterpart Saint George. In the light of my decision to follow the path of mystery, I was particularly drawn to the depiction of the devil (or the dragon) as a grotesque monster. To our modern eyes, their ridiculousness is very challenging. It is hard not to laugh with such a silly looking creature. But if you think about the history of evil people, or indeed very recent events in politics, doesn’t evil often appear as a clown?

In a rather unique depiction of Saint Michael, by Piero della Francesca, the angel actually kills the devil, having cut off the head of a serpent. The serpent that seduced Eve in the Garden of Eden presumably, which is Lucifer in disguise. It’s extremely rare to see Michael commit such violence. Usually he just subdues the devil, pushes him into hell (or onto earth!). Maybe he cannot kill him. Maybe God won’t allow it.

It’s a fascinating topic that I hope I can do justice in my own piece.