Virtual Reality is bound to die. We don’t believe that the technology can survive in the current sociopolitical context. That’s why it provides a perfect medium for a project inspired by theater of Polish artist Tadeusz Kantor (1915-1990). He referred to his work as Theater of Death. Is there a better way of describing Virtual Reality? 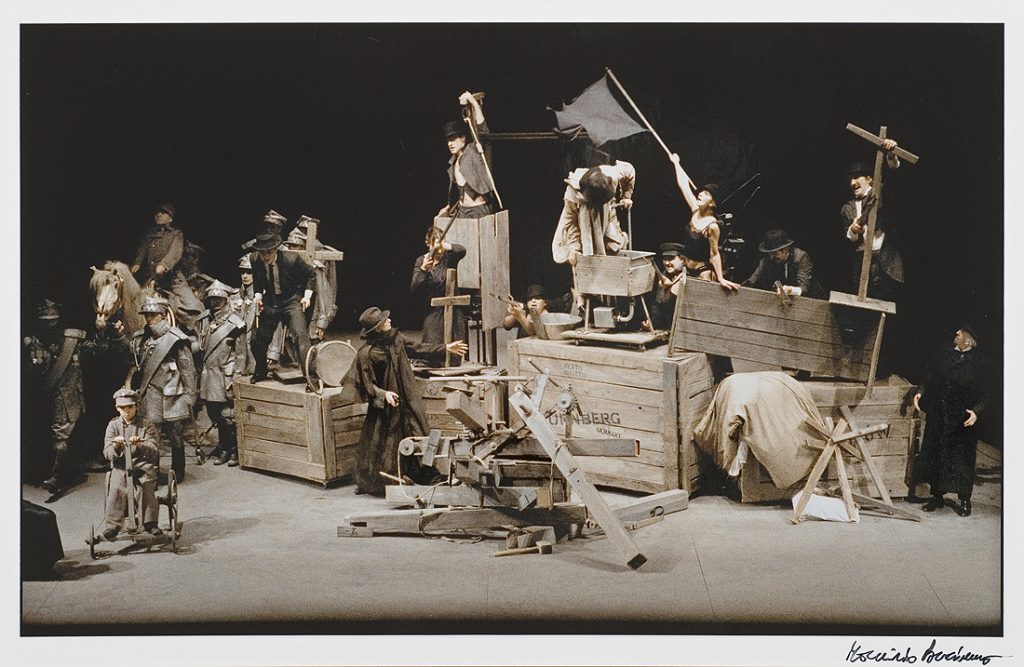 Cricoterie is named after Kantor’s theater company Cricot 2. It does not aim to reproduce any particular play or represent Kantor’s work in some way. But it is inspired by his spirit. And many elements are directly taken from stage props and characters that recur in his plays.

It is especially the license to be completely sincere that excites us. A sincerity that exposes its fragility in the absurd and the ridiculous (“cricot” is the reverse of “it’s a circus” in Polish). Kantor’s work is haunted by death and explores the ambiguity offered by the stage between living actors, static characters and limp mannequins. This haunting was illustrated acutely by the director’s persistent presence on the stage during each play. He seemed to surround himself with spectacles from his memories and dreams, a sort of self torture in an desire for catharsis, perhaps.

In Cricoterie the VR user performs the role of the director. Objects and characters are moved and manipulated by virtual hands to create dramatic scenes on a simulated theater stage. A wardrobe supplies a never ending stream of props. Every time you open its doors, a new element appears. Some of these are inanimate objects, others life-size ball-jointed dolls whose life-like eyes stare directly at you, all inspired by Kantor’s world.

In computer simulations such as those presented in Virtual Reality objects are neither alive nor dead. The wooden cross is as alive as the marching soldier. We emphasize this in Cricoterie by driving all animation with physics simulation. The awkwardness of the motions and the many errors this produces greatly intensify the tragedy.

The initial prototype for Cricoterie was created during a residency in Kantor’s former summer home in Hucisko, near Krakòw. This VR prototype consisted of a wardrobe on stage from which the user, equipped with VR motion controllers, could grab objects such as a cross, a chair, the bride and a soldier, and move them around on stage. Over the past few weeks, we have added a cage, gallows and a horse skeleton in a wheeled frame (all directly taken from original stage props). A major addition to the interaction in the piece is scaling. By holding a button on the VR controller the scale of the world is increased or reduced. This allows the user to move around with giant steps. And when holding an object while releasing the button, the object retains its relative scale and becomes either tiny or gigantic. The effect is astoundingly dramatic in virtual reality, and almost imperceptible in screenshots.

Cricoterie is an incredibly satisfying project for us. Not only because of the subject matter and the technology but also because of the way we are approaching production. We work more slowly now than we did when we were making videogames (a necessity for our health). This provides a real boost for both motivation and inspiration. We also work “without a script”. Rather than breaking our heads over a grand master plan and then producing many little puzzle pieces towards a glorious end result, we allow the prototype to inspire us and we work in collaboration with the actors and props on the virtual stage. There’s a certain mood that we do strive for, certain rhythms and flows that we want to implement, and long lists of ideas. But we’re not forcing anything. And ideally, for us, this project would never end, and we would just present different stages in its evolution to the public. This permanent state of unfinishedness seems highly appropriate for interactive art, where it is the spectator who creates the spectacle. In this sense, Cricoterie is merely a toolbox, a playset. It’s a stage with props and actors. And you have to make the play.

One thought on “Cricoterie: a virtual theater of death”